Growing up in a region of the south that was part of the epicenter of the Civil Rights Movement, I’ve always felt a certain connection to the past fight Jim Crow.  The high school that I attended was officially desegregated only 6 years prior to my birth.  As a child, I frequently visited the famous Woolworth’s store where four young male students from North Carolina A&T State University participated in the first sit-in, before it closed in the early 1990s.  My father and uncles were born in the “black hospital” that provided health and medial services to African Americans in central North Carolina, at a time when they had no other option.  I am a child of the Civil Rights Movement and part of Martin Luther King’s dream.

Today marks the 50th Anniversary of the 1963 March on Washington, a critical milestone in the movement for racial equality in America.  The 1963 March on Washington was one of the largest of its time, bringing together people of all races and ages in a fight to end racial apartheid in the United States.  Today, I will remember those who fought and sacrificed for my right to live as an equal member of American society.

Remember when MTV used play music videos? Before Reality TV…before autotunes…back when artists could actually sing and play instruments.  If you do, you’re probably an 80s kid like me.  This video by A-ha, reminds me that time in the 80s.  Who didn’t love “Take On Me”?  Such a beautiful story line too….Boy falls in love with a girl from another dimensions, and does everything be with her.

Six weeks ago I ordered an “at home” gel manicure kit from one of my favorite online flash sale sites.  I am a do-it-yourselfer, so this was right up my ally.  When my new Red Carpet Manicure Gel Polish Pro Kit arrived in the mail, I was totally excited.   As a huge fan of gel manicures and pedicures, I frequently dole out $70 – $80 per visit for the beautiful, glossy gel effect that lasts 2-3 weeks without chipping like regular polish.   When I saw the Red Carpet Pro Kit listed on GiltGroup.com, I thought, “why not try it”.  It will pay for itself in 2-3 uses.

The kit was really easy to use came with a classic red polish.  I purchased additional colors and fell in love with a Coral color that accentuated my brown skin so well.  Just like the salon, I exposed my nails to the UV light dome between coats, which allowed the gel to dry instantly.  The top coat sealed the color in and gave my nails a great glossy/wet look that lasted 2.5 week. 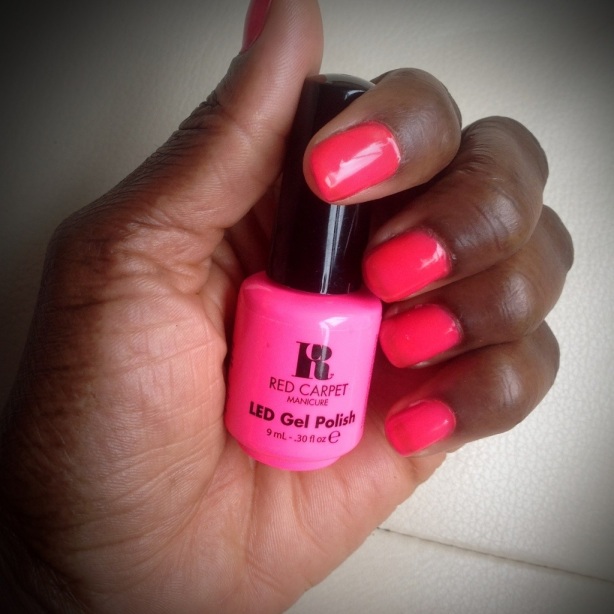 I highly recommend at home, DIY gel manicure kits.  They are easy, cost effective and fun. Red Carpet Manicure sells great starter kits, but I’m sure there are other great brands also.  Additional gel colors can be purchased at Ulta.com or Target.com for roughly the same price as regular polish.

It was so much fun to wear this ensemble to the office last week.  Colorful skirts and dresses always provide a feminine flare and a great alternative to the drab and boring work dark suit (black, grey, navy blue…take your pick…boring!).  I coordinated a hot pink skirt by “Wow Couture” with a black “BCBG” top, adorned with a beaded accent.  A pair of black peep toe shoes by Nine West, rounded out my outfit.  Ladies, don’t be afraid of color in the office. Bright hues are a great way to liven up your work day!!!! 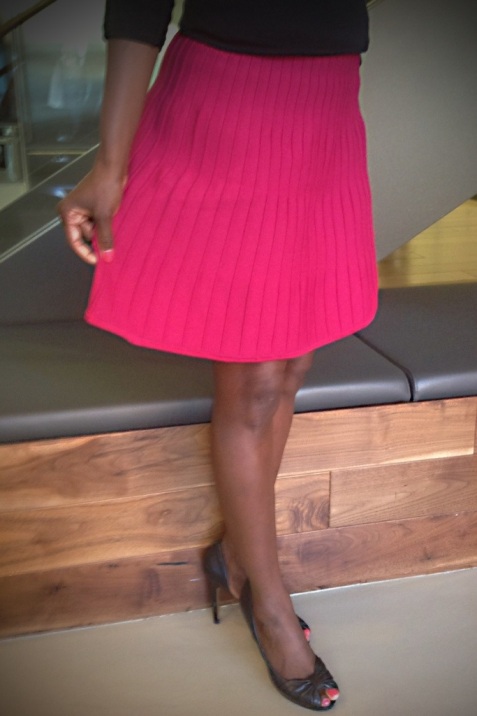 Whitney Elizabeth Houston was born August 9, 1963 in Newark, New Jersey.  This beautiful song bird entered the music scene in the 80s and took the world by storm.  I remember being in awe of her as a child.  Whitney’s voice and beauty were both remarkable.  Her untimely death last February was tragic, but her legacy and music will live on.  Happy birthday Whitney…you are still loved and dearly missed. 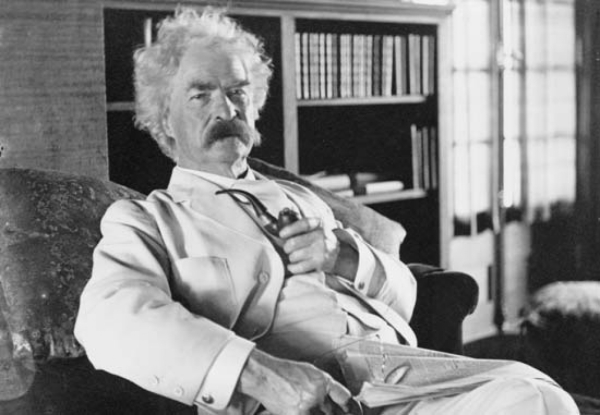 Keep away from small people who try to belittle your ambitions. Small people always do that, but the really great make you feel that you, too, can become great.

As we remember the legacy of Nelson Mandela today, please do not forget the woman who worked to co-create his legacy and who molded Nelson (once regarded as a terrorist around the world) into the international hero he is known to be today. Winnie Madikizela-Mandela became Nelson Mandela’s 2nd wife at the ripe, young age of 19. This amazing young woman could have never have imagined the journey that her life would take after marrying a much older Nelson, who is roughly 18 years her senior. Her resilience, intelligence and fortitude served her, and Nelson, well though his years of incarceration in South Africa’s prisons. It was Winnie who released Nelson’s letters to the world (and made sure the world paid attention), never allowing the public to forget him has he sat in jail. She raised his their 2 children and was at the forefront of the battle against the violence and cruelty of the Afrikaner led apartheid movement, while Nelson “sat” in jail.

The unfortunate part of the Mandela legacy is that she, the mother…and nurturer of the anti-apartheid movement, was cast aside as a woman who was too empowered…and who didn’t know her place after Nelson Mandela was released. Winnie Madikizela-Mandela, I will never forget that without you, Nelson Mandela would likely have been a lesser known historic figure who’s legacy would never have been truly appreciated.

New York is full of gritty, hard realities.  Life in New York is softened by the art scene…but I don’t just mean art hanging in museums.  The patient observer, who takes time to stop and note the constant presence of street art and graffiti that color every surface in the city of Gotham, will witness amazing beauty in every nook and crevice of the city.  I took these shots in the Meatpacking district of Manhattan, after a typical evening dinner with friends.  This bold and unassuming art is so integrated into backdrop of the area that most New Yorkers overlook it.

Warning: This song features a real singer with real musicians. No autotune. No synthesizers. No “DJ Samples”. Just original music, by real people with actual talent. This video was featured on MTV when it only featured music videos.

I love this song, Funkin’ for Jamaica (NY), by Tom Browne (circa 1981). It features 2 of my favorite instruments: The Trumpet and the Bass Guitar.

James Weldon Johnson‘s (1871 – 1938) poem, The Creation, is a childhood favorite of mine.  This beautiful piece is a rendition of the Old Testament’s story of the creation of the world from the “Book of Genesis” (from the Bible and Torah).

And God stepped out on space,
And He looked around and said,
“I’m lonely,
I’ll make me a world.”

And far as the eye of God could see
Darkness covered everything,
Blacker than a hundred midnights
Down in a cypress swamp.

Then God reached out and took the light in His hands,
And God rolled the light around in His hands
Until He made the sun;
And He set that sun a-blazing in the heavens.
And the light that was left from making the sun
God gathered it up in a shining ball
And flung it against the darkness,
Spangling the night with the moon and stars.
Then down between
The darkness and the light
He hurled the world;
And God said, “That’s good!”

Then God himself stepped down —
And the sun was on His right hand,
And the moon was on His left;
The stars were clustered about His head,
And the earth was under His feet.
And God walked, and where He trod
His footsteps hollowed the valleys out
And bulged the mountains up.

Then He stopped and looked and saw
That the earth was hot and barren.
So God stepped over to the edge of the world
And He spat out the seven seas;
He batted His eyes, and the lightnings flashed;
He clapped His hands, and the thunders rolled;
And the waters above the earth came down,
The cooling waters came down.

Then the green grass sprouted,
And the little red flowers blossomed,
The pine tree pointed his finger to the sky,
And the oak spread out his arms,
The lakes cuddled down in the hollows of the ground,
And the rivers ran down to the sea;
And God smiled again,
And the rainbow appeared,
And curled itself around His shoulder.

Then God raised His arm and He waved His hand
Over the sea and over the land,
And He said, “Bring forth! Bring forth!”
And quicker than God could drop His hand.
Fishes and fowls
And beasts and birds
Swam the rivers and the seas,
Roamed the forests and the woods,
And split the air with their wings.
And God said, “That’s good!”….click here to continue reading